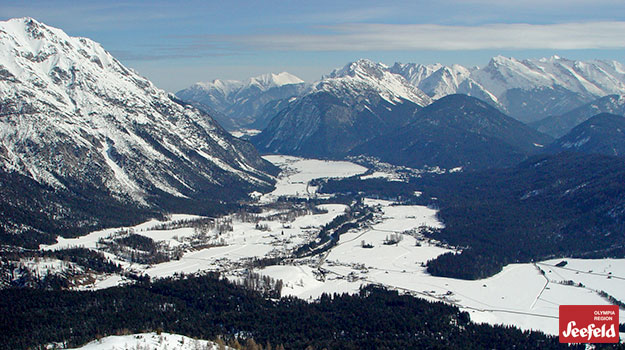 Tyrol: The Seefeld Plateau west of Innsbruck is comprised of the towns of Seefeld, Leutasch, Scharnitz, Reith bei Seefeld and Mösern/Buchen. The region is especially well-known as a cross-country skiing paradise, with close to 300 km of groomed trails. The cross-country events of the Olympic Games in 1964 and 1976 took place there, as well as the 1985 Nordic Skiing World Championships. And it is home of the International Ganghofer Race in Leutasch. << View a map of the area and trails >>

Magnificent Scenery: Only 13 percent of the majestic Austrian state of Tyrol is inhabitable, the vast majority of this beautiful region consists of dramatic granite peaks, vast glaciers and pristine snowmelt lakes. Shared between Austria and Italy, the Tyrol encompasses some 10,000 square miles, including more than 700 peaks approaching 10,000 feet. 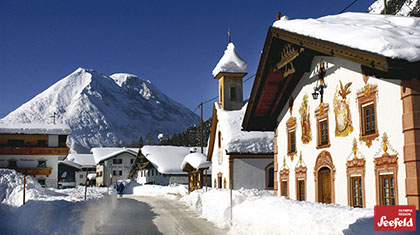 One of Europe's premier skiing destinations is a hiker's haven during the summer, and while the requisite lederhosen and feathered hats are much in abundance, the area also buzzes with a healthy cosmopolitan hedonism. The splendid capital city of Innsbruck is sprinkled throughout with onion-domed churches and quaint medieval squares. (from Andrew Harper, travel writer)

Seefeld, Austria: Seefeld in Tyrol is a municipality of the Innsbruck-Land District in the Austrian state of Tyrol, located about 17 km (11 mi) northwest of Innsbruck. It is one of the most popular Tyrolean tourist destinations especially for skiing in winter, but also for walking holidays in the summer.

The settlement first documented in 1022 has existed as a farming village for centuries. Tourism began in the early 20th century, but has only grown to its present size since the mid-1970s.

The village is situated on a south-facing plateau north of the River Inn on the watershed between the basins of the Inn and the Isar. The plateau (which also comprises the villages of Leutasch, Reith, Scharnitz and Mösern) is surrounded by the Wetterstein mountain range to the west, and the Karwendel mountain range to the east; it falls away in a steep drop off to the Inn Valley to the south. To the north, the High Valley leads through the village of Scharnitz towards the border with Germany at Mittenwald.

Seefeld has two main mountain areas: one is the round hill "Gschwandtkopf" and the other is a series of mountains (known incorrectly as "Rosshütte" after the large mountain restaurant halfway up). These mountains dominate the Seefeld plateau; from left/north to right/south, they are the Seefelder Joch, Seefelder Spitze, Härmelekopf and Reither Spitze. Notable other landmarks include the Seekirchl, a small, onion-domed church, and the Pfarrhügel, an extension of the Gschwandtkopf into the town centre forming a small attractive hill. There is also a lake called the Wildsee.